Sawatari Onsen prides itself on the quality of its spring water, "The Bath for Pearly Skin” 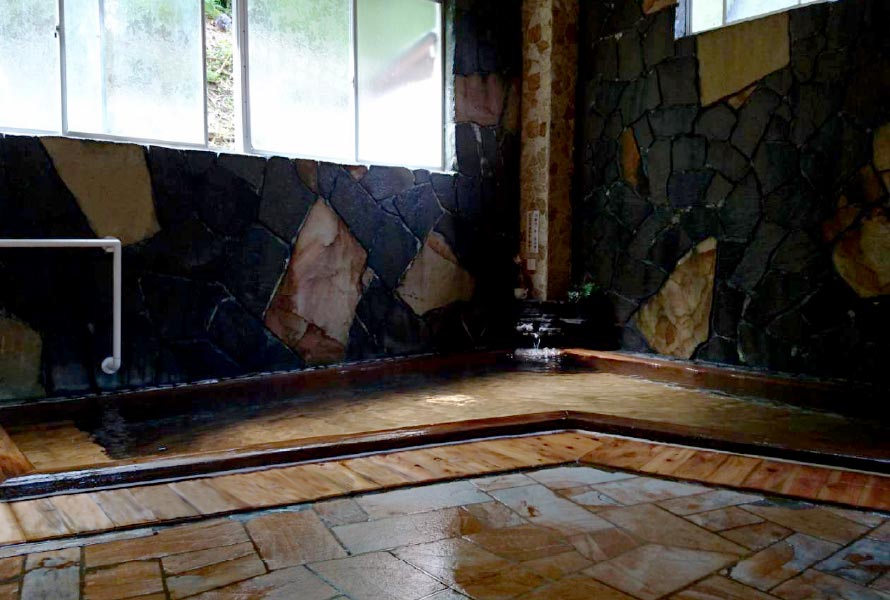 01 What is Sawatari Onsen?
Called the "hidden hot spring"... 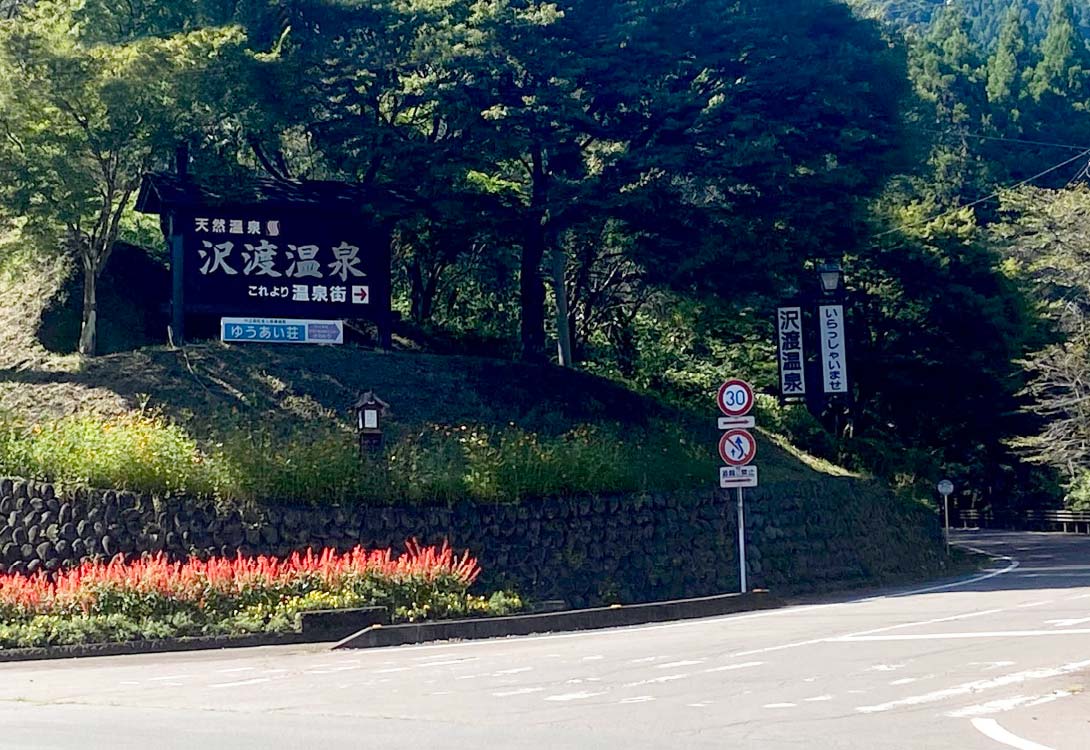 Sawatari Onsen is a calcium, sodium sulfate, chloride hot spring.
The clear, colorless sulfate spring is slightly alkaline and soft to the touch, and its smoothness is praised as the purest hot water for beautiful skin. In the old days, Minamoto no Yoritomo, Kiso Yoshinaka, Jippensha Ikku, and in modern times, Wakayama Bokusui (a literary scholar), Takano Choei (a Dutch scholar), and Fukuda Sotei (a physician) were among the many people who loved this hot spring.

Kusatsu Onsen has been famous throughout Japan as a therapeutic hot spring since ancient times and as a recreational area in modern times, and its water is “highly oxidative”.
When the Kuresaka Pass was the main road to Kusatsu Onsen, Sawatari Onsen was indispensable as a "finishing hot spring," "cleansing hot spring," or "healing hot spring" to restore smoothness to rough skin caused by the highly acidic water of Kusatsu Onsen.

The hot spring ranking list published in 1873 in the Fuyuzuminosato Museum in the neighboring village of Kuni shows Kusatsu Onsen as the Ozeki of the east (there was no Yokozuna at that time, and the highest rank was Ozeki), with Sawatari Onsen in the center column of the list of promoters. Later, in 1945, the hot spring resort was destroyed by a large fire. With the construction of new roads and other changes in the times, the area has come to be known as a "hidden hot spring”.
Even today, however, people who know about the quality of this hot spring come all the way from distant places to soak in it. There is also a Sawatari Onsen Hospital that uses the hot spring for medical treatment, and the quality of the spring water is first-rate.

Benefits include cuts, burns, neuralgia, rheumatism, motor paralysis, chronic digestive diseases, hemorrhoids, sensitivity to cold, diabetes, women's diseases, convalescence, athlete's foot, and more. It is said to be effective for diseases originating from the epidermis.
Ryumeikan is 100% free-flowing hot-spring water, and you can also drink it. The hot spring baths are good for bathing and drinking, and the inn is proud of the quality of its hot spring water. 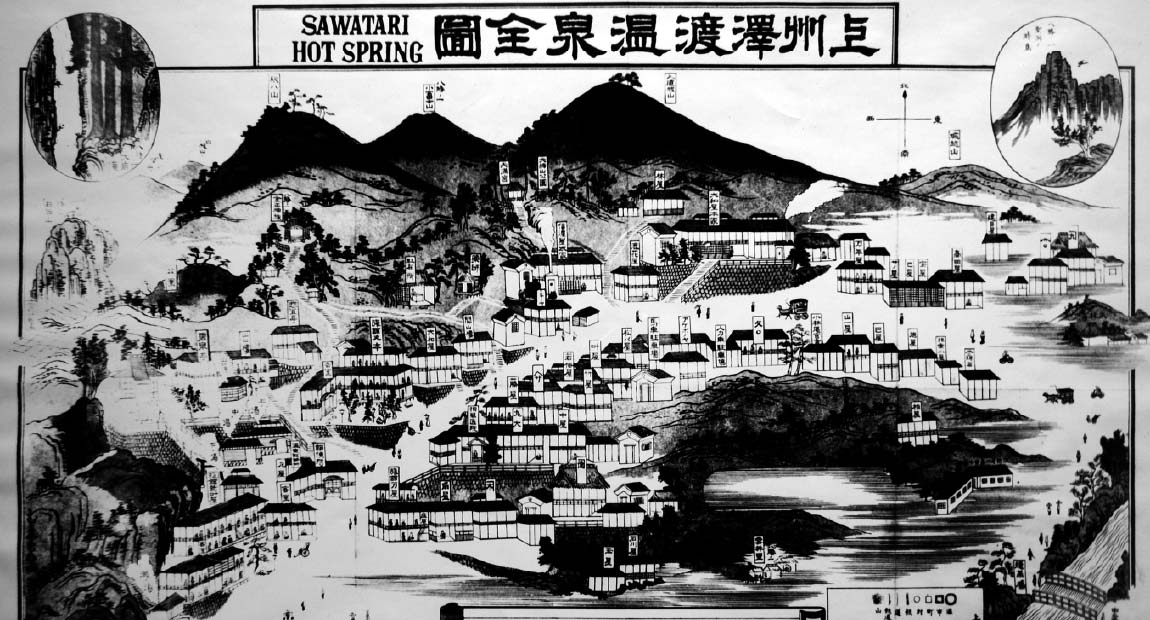 Sawatari Onsen in the Meiji era.
Ryumeikan is listed just below the source as Ryokan Shinkanaya, the predecessor of Shoeikan.
(Material courtesy of Mr. Mitsuyoshi Karasawa. The original is also found at the homemade soba shop "Yoshinoya" at the top of the Sawatari hot spring resort area) 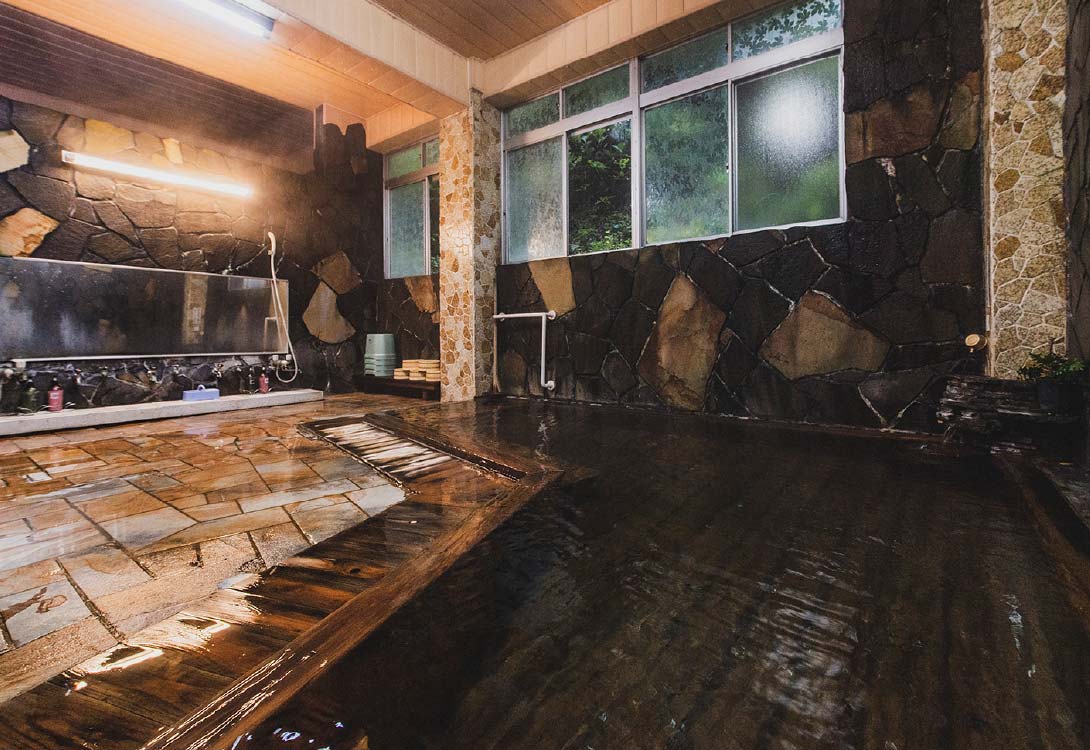 Ryumeikan is a long-established ryokan located almost exactly in the center of Sawatari hot spring resort area, and has been in business since the Taisho era.
It is the facility closest to the spring head and is proud of the quality of its 100% free-flowing hot-spring water.
The hot water that flows continuously into the bathtubs is plentiful and available 24 hours a day. It is a beautiful hot spring that is gentle to rashes and eczema.

You can also drink the spring water.
The clear, colorless hot spring water is packed with elements.
* If the water is too hot, please let us know.
*In times when onsen flowers are too plentiful, the water may be filtered

The hinoki-covered bathtub makes the softness of the spring even mellower. On the left is the middle bath and on the right is the large bath. (We occasionally switch which baths are used by men and women.)
Hot spring water is also used for the hot water in the inn’s water tanks. Please use it prudently. 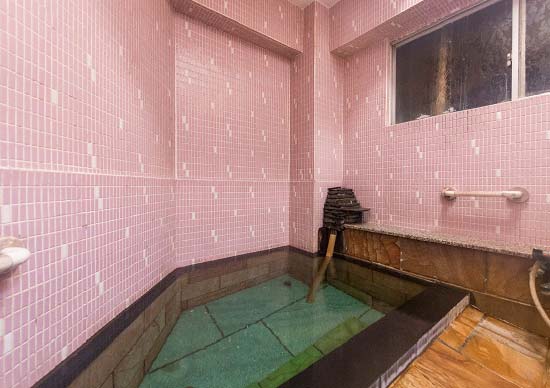 We also have a small family bath available.
It is available for private use, so please let us know if you would like to use it. 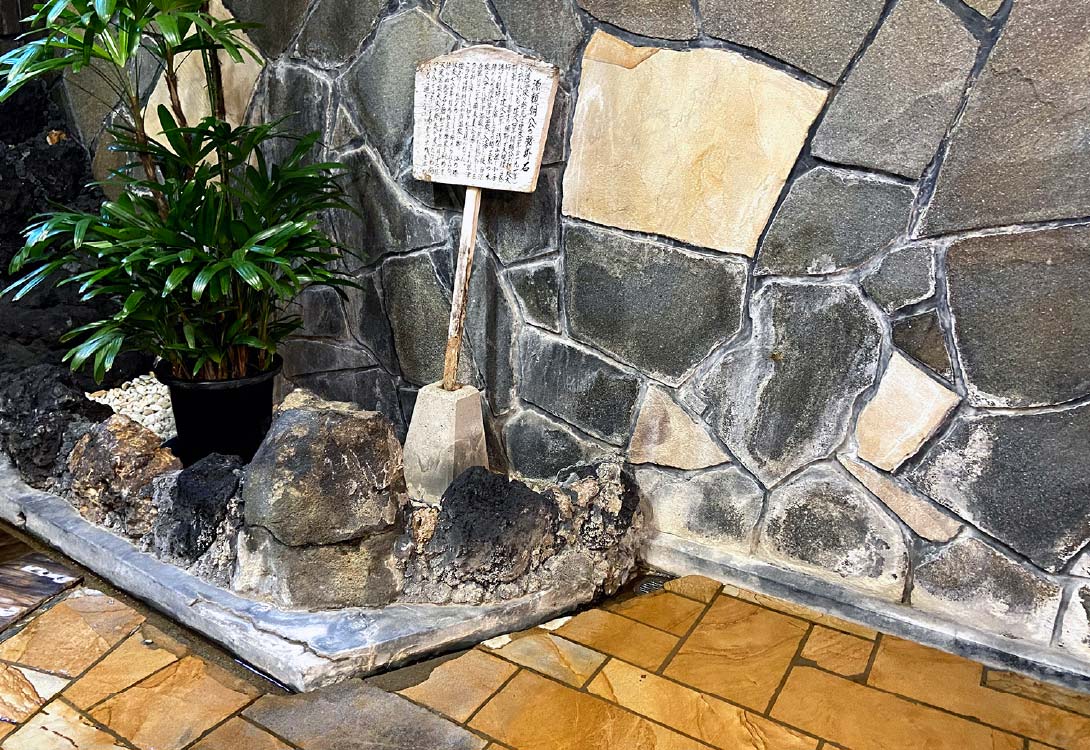 It is said that Sawatari Onsen was discovered in the 2nd year of Kenkyu (1191). It is well known that Minamoto no Yoritomo, after becoming a shogun, conducted a large scale hunting expedition at the foot of Mt Fuji. It is said that he bathed in Kusatsu Onsen on his way back from the main camp in Mihara and later bathed in this onsen when he held a small shooting hunt at the foot of Mount Asama in the 2nd year of Kenkyu.
Since then, it has been known as the hot spring of beauty, and is known as Kusatsu's "healing hot spring" because the rough skin caused by Kusatsu Onsen became so smooth. The rock by the large bath is said to be the one on which Minamoto no Yoritomo sat when he bathed in this hot spring, which was an untapped spring at the time.
However, the rock was burned in the Sawatari Onsen Fire of 1945, and today, it barely retains any vestige of its original form. Only a small amount of the rock remains above ground, but it is long and narrow, with the lower part buried deep in the ground. 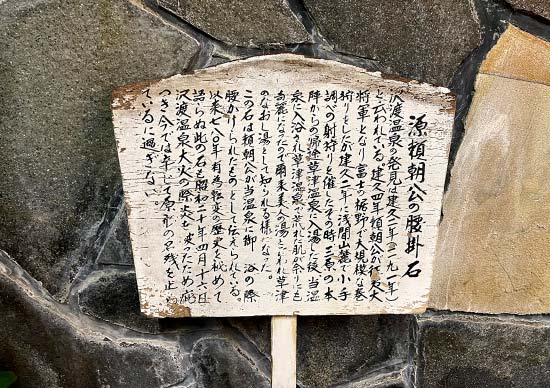 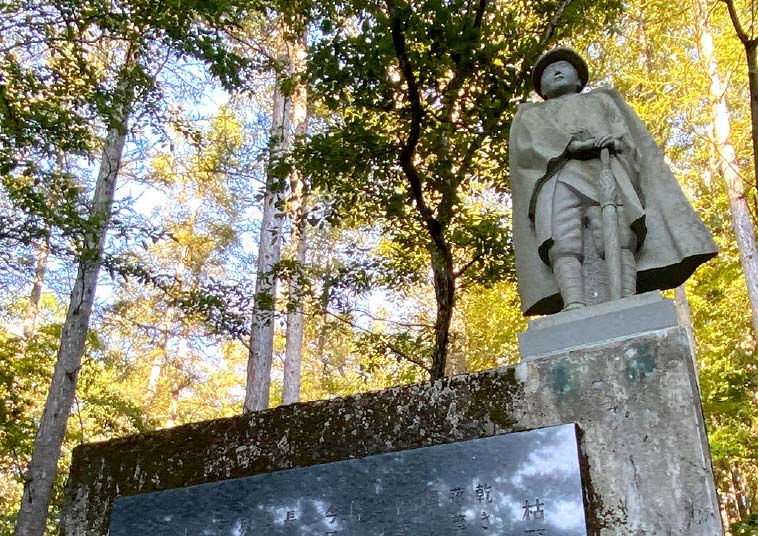 Bokusui Wakayama
Literary scholar and poet
Bokusui Wakayama
As shown on the top page, in his Minakami Travel Journal, it is stated that lunch was served at "Shoeikan". The building at that time was destroyed in the big fire in Sawatari in 1945. After the great fire, a hot spring drawn from a nearby source and a ryokan with only four rooms was rebuilt. The "Minamoto no Yoritomo no Koshikakeishi" (stone on which Minamoto no Yoritomo sat) was also located beside the source. 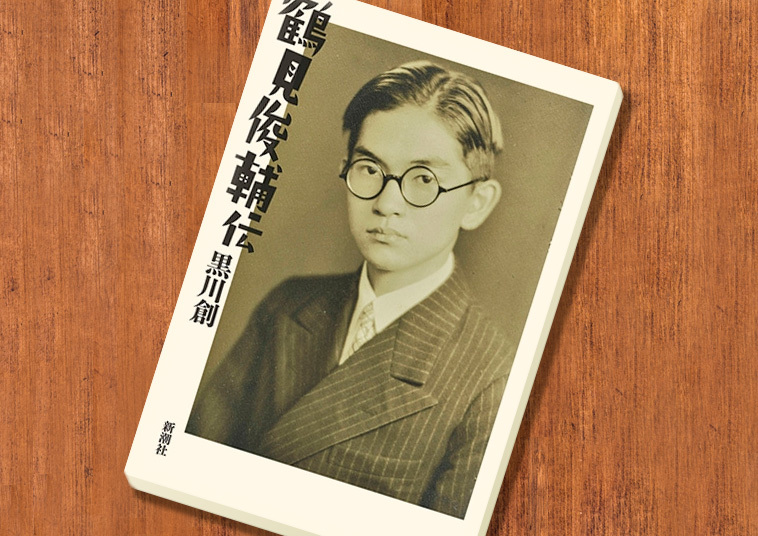 Shunsuke Tsurumi
Critic, philosopher, popular culture researcher, political activist
Shunsuke Tsurumi
Around the end of the war, he stayed at Ryumeikan for a month and a half on a trip following in the footsteps of his distant relative, Choei Takano. After the big fire in Sawatari, the only inns where he could stay were Maruhon Ryokan and Ryumeikan. Some may wonder why Shunsuke Tsurumi decide to stay at Ryumeikan… Please come and listen to the story. 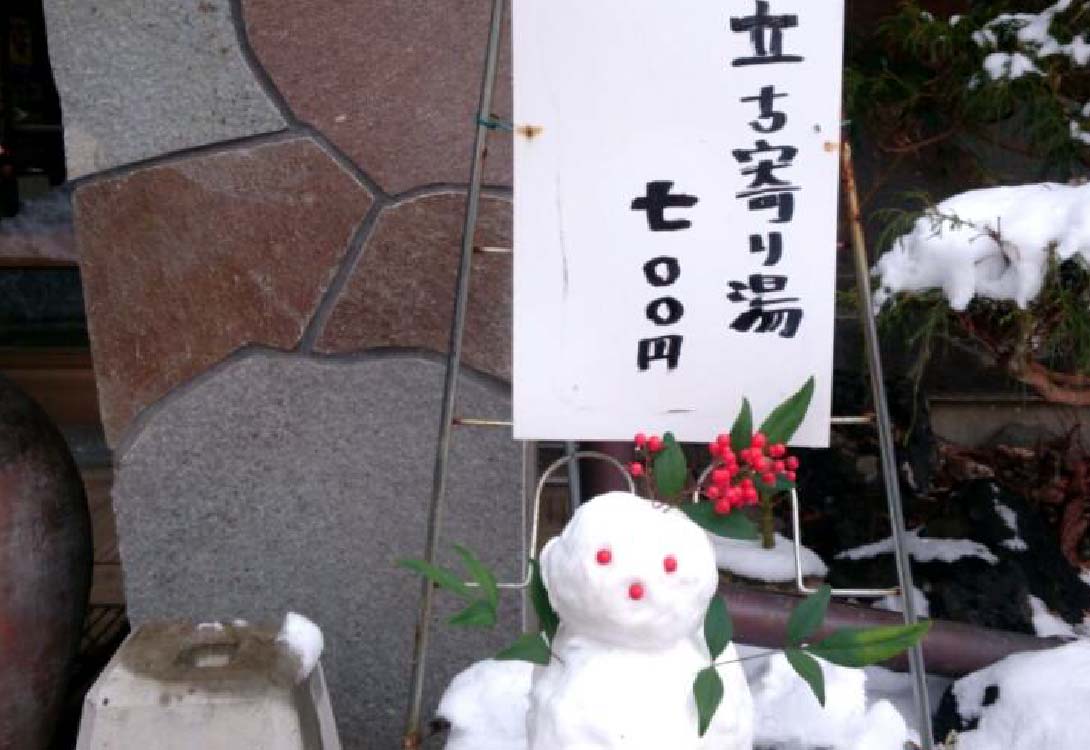 Next door is a place where the number of customers never stops.
The popular public bathhouse.
Those staying at ryokan in the Sawatari hot spring resort are entitled to free bathing there. Please bring your "bathing permit" issued at each inn.
Please be sure to enjoy both public and private Ryumeikan baths.
Fee
Adult:300yen
Child:200yen 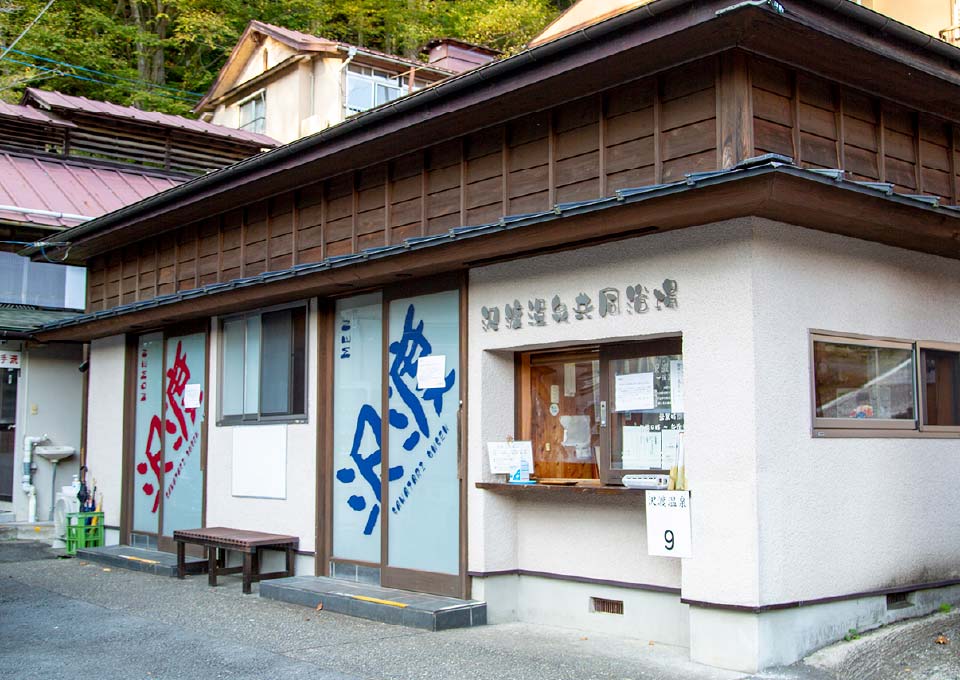